A trail of iron footwear stands as a monument to the thousands executed along this riverbank during WWII.

In October of 1944, Hitler overthrew the leader of the Hungarian government, Miklos Horthy, and replaced him with Ferenc Szalasi.

Szalasi, whose ideology closely followed Hitler’s, immediately established the Arrow Cross Party – a fascist, anti-semitic organization that brutally and publicly terrorized the Jews in Budapest by beating and killing them. Nearly 80,000 Jews were expelled from Hungary in a death march to the Austrian border and approximately 20,000 Jews were brutally shot along the banks of the Danube River. The victims were forced to remove their shoes at gunpoint (shoes being a valuable commodity during World War II) and face their executioner before they were shot without mercy, falling over the edge to be washed away by the freezing waters.

Shoes on the Danube Promenade is a haunting tribute to this horrific time in history, created by film director Can Togay and the sculptor, Gyula Pauer. Installed along the bank of the Danube River in Budapest, the monument consists of 60 pairs of 1940s-style shoes, true to life in size and detail, sculpted out of iron.

Located along the edge of the Danube River, on the Pest side, just south of the Hungarian Parliament Building. Go there before sunset time, the views are great with the sun dropping down and the lights of the city coming out.

Built in 1870 at the bridge that connected Buda and Pest, this spectacular incline railway was almost lost forever during World War II.

At the bottom of Castle Hill is the Széchenyi Chain Bridge, Hungary’s first permanent structure to cross the Danube River. It opened in 1849, and the solid span of wrought iron and stone connected Buda and Pest, the two sides of the capital city.

The Funicular near the historic Chain Bridge across the Danube. The lower station is on Clark Ádám tér next to the Tunnel, and the upper station is between the Castle and the Sándor-Palace.

This Hungarian castle was built out of cardboard and wood until it proved so popular that it got upgraded to stone.

Located on an artificial island in the heart of Budapest within spitting distance of Hungary’s national monument, Vajdahunyad Castle nonetheless presents an odd contrast to its stately surroundings.  The clash of colors, patterns, engravings, and building materials give the structure an almost funhouse-like appearance, and eerie statues of Béla Lugosi and the anonymous author of the Gesta Hungarorum, “the deeds of the Hungarians,” on the castle grounds add to the site’s dreamy ambiance.

A series of caves under Castle Hill that once held the prisoner Vlad Tepes, better known as Count Dracula.

The Labyrinth beneath Budapest’s Castle Hill is where Vlad Tepes was held captive and tortured for 14 years, starting in 1463. We remember him now as Vlad the Impaler, better known as “Count Dracula” (though the tale is only fiction).

This attraction is permanently closed following a police raid. A different labyrinth has opened in its place.

From Austrians to Nazis to Soviets, this historic Budapest fortress has a history as complex as the city itself.

Built in 1851 by the Hapsburgs as part of their strategy to take over Hungary and form the Austro-Hungarian empire, the Citadella remains a symbol of oppression as well as liberty.

The Citadel can be reached by bus 27 from Móricz Zsigmond körtér. It is atop Gellert Hill.

Tucked away near more famous landmarks lies a statue meant to symbolize the confluence and continuing development of human culture.

In a secret corner of Budapest’s Gellért Hill, the world’s greatest religious figures meet silently around an orb. At least, that’s what Hungarian sculptor Nándor Wagner envisioned when he created “The Garden of Philosophy,” a cluster of statues you may happen upon if you wander away from the major tourist attractions of the Citadel and the Liberty Statue, perched atop the crown of the popular hill overlooking the Danube.

Once the home of a hermetic monk, this cave now houses a small church.

On the Buda side of Budapest, tucked into the side Gellert Hill (named after a saint who was stuffed into a spiked barrel and rolled down the hill), is a small cave with a large cross above it. Supposedly once the home of a hermit monk, the cave is today run by the Pauline Monks.

Visitors entering the church are expected to dress modestly. If women are wearing dresses or blouses that don’t cover the shoulders, shawls will be provided at the entrance that can be returned at the end of their visit.

A 19th century artistocrat’s mansion, turned into a library, hidden in a modern library.

The incredible Szabo Ervin Library in Budapest is a hidden treasure, left out of guidebooks, tucked into a busy section of the city. But for those in the know, the Szabo Ervin Library is a stunning step back to a time when libraries were like mansions – perhaps that’s because it’s in one.

Built by Count Frigyes Wenckheim (1842 – 1912), a well-known Hungarian aristocrat at the end of the 19th century, the Central Library is easy to miss – today a modern library surrounds it, secreting away the beautifully preserved Wenckheim Palace.

The City Council purchased the building and converted the beautiful palace rooms into reading rooms for their new library in 1931. The Hungarian neo-baroque arcitecture makes for a handsome backdrop to the walls of leather tomes. The old Dining Room, converted to a long reading room, centered by a long table, once for feasts, now for quiet contemplation, is an especially ambient place. The former Smoking Room, with its spiral staircase leading to a gallery also stands out. These two rooms are warmly lit and encased in dark wood.

While it can be a confusing process to find the Central Library in the maze-like modern section of the library, once you do, all that is left is to pick out a beautiful old book, sink back into a deep leather chair, surrounded by the soft light of chandeliers, and relax like a 19th century Hungarian artistocrat.

This quaint Hungarian railway system is operated exclusively by children between the ages of 10 and 14.

Stretching through a lovely patch of quiet Hungarian forest, the Gyermekvasút rail line would seem to be just another peaceful sightseeing rail line were it not for the captain and crew being exclusively underage.

Following in the footsteps of Yugoslavia and the Soviet Union, Hungary first conceived of a railway staffed by children all the way back in 1947. As opposed to a strange governmental child labor scheme, the project was seen as a way of training young men and women important trade skills and as an honorable position to take pride in. When the rail line first rumbled to life it consisted of three passenger lines which were nearly an instant hit, filling with passengers each day it ran. The popularity of the line continued for decades before the lure of tourism abroad pulled attention away from the kiddie-staffed train lines.

Currently the Gyermekvasút is the world’s largest child’s railway in the world.

Budapest’s only communism theme bar isn’t afraid to poke fun at its history.

More than most other Eastern European cities that were once part of the Soviet Bloc, Budapest seems to have a sense of humor about its political past. The décor of Red Ruin, the city’s only communism theme bar, delightfully subverts communist propaganda with colorful pop art and puns.

Popular with locals and tourists, the bar features kitschy attractions like florescent red lighting, a cardboard poster of Marx and Lenin that you can put your face through, and pop art stencils of Stalin with the caption “Joseph Stylin.” The bar’s labyrinthine, redbrick basement (the entrance to which is easy to miss) features even more wall art and communism jokes.

Uh, pardon me, ma’am, but I couldn’t help noticing that there’s a Columbo statue in the middle of Budapest.

Thanks to a tenuous familial connection, Budapest’s Falk Miksa Street is now home to a life-size bronze reproduction of Peter Falk as America’s favorite soft-spoken detective in the rumpled coat, Columbo.

Installed in 2014 at an estimated cost of $63,000, the bronze P.I. was part of an overall rejuvenation project in the area, although exactly why the figure was chosen is a bit of a mystery. According to organizers, actor Peter Falk may have been related to the 19th-century Hungarian political figure, Miksa Falk, after whom the street is named, although they also admit that this connection has yet to be proven. The American Falk is known to have had Hungarian roots on one side of his family, although it has never been linked to Miksa Falk’s family. Some have also questioned the timing of the statue’s installation given that Peter Falk passed away in 2011, meaning that it is unlikely to commemorate his passing either. Many believe that it was unveiled in time to garner votes in an upcoming election, although this seems to be a strange way to go about it. 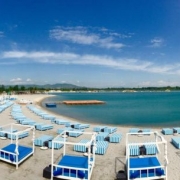 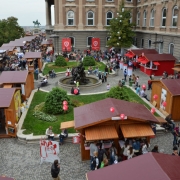 Things to do in Budapest September

Budapest is a city of spas, especially in summer! 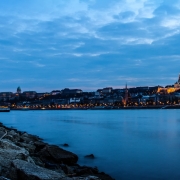 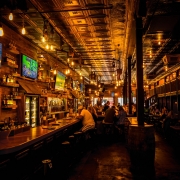 Let’s Drink With The Locals: The 10 Best Bars In Budapest 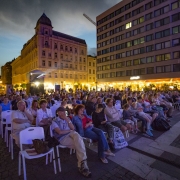 SEE OUTDOOR FILMS FOR FREE IN THE HEART OF BUDAPEST 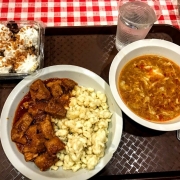